Thomas, of the Fred Hutchinson Cancer Research Center in Seattle, was awarded a Nobel prize in 1990 for his research, yet he actually began that work decades earlier. Thomas performed his first bone marrow transplant in 1956, according to the Associated Press. Nearly a million transplants have been performed since, according to Fred Hutchinson, with about 60,000 performed annually.

For readers of StemBook, bone marrow transplantation represents the first practical use of stem cells in the clinic.

“It’s not the bone marrow that is important, it’s the hematopoietic stem cell population in the bone marrow,” says Hal Broxmeyer, a Distinguished Professor at Indiana University.

Those stem cells are used to reconstitute a patient’s bone marrow depleted by anticancer therapies. The approach is mainly directed at diseases involving the marrow and/or lymph nodes, such as leukemia, lymphoma, and multiple myeloma, as well as for congenital immune deficiencies and hemoglobin disorders like sickle cell disease and thalassemia, especially in children.

These days most bone marrow transplantations are performed not, as in the technology’s early days, with actual bone marrow (which has to be harvested under general anesthesia by a couple hundred needle sticks into the hip bones, according to James Young, attending physician in the Adult Bone Marrow Transplant Service at the Memorial Sloan Kettering Cancer Center (MSKCC)), but rather from either the peripheral blood or umbilical cord blood.

Other technologic advances have taken hold over the past five decades, as well – for instance, better immunosuppression regimens; new and gentler conditioning methods; and other improvements that have extended the age range for the treatment to patients as old as 75. “The basic procedure is the same, it’s just a matter of a number of chemicals and procedures have been developed to make the transplant more safe,” says Leonard Zon, HSCI Executive Committee member and Principal faculty member, HHMI Investigator and Director of the Stem Cell Program at Children’s Hospital Boston.

Some 160 patients annually receive bone marrow transplants of one form or another at the UCLA Jonsson Comprehensive Cancer Center, according to Gary Schiller, Director of the Hematological Malignancies Stem Cell Transplant Unit. At MSKCC, physicians in 2011 performed 129 adult allotransplants (that is, transplants using donor material) and 39 pediatric allotransplants. They also performed 178 adult autologous transplants (in which a patient’s cells are collected and then reinjected) and 6 pediatric autologous transplants, Young says. Those figures generally agree with statistics compiled by the Center for International Blood & Marrow Transplant Research (CIBMTR), which show that donations by unrelated donors surpassing related donors for the first time in 2005 or so, with the vast majority of transplants actually involving autologous (i.e., self) material. [5] (see Figure) 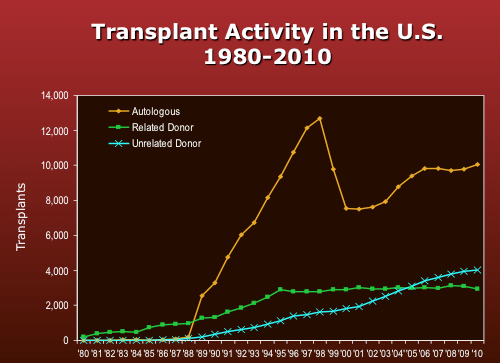 According to Young, the overall success rate for bone marrow transplantation hovers around 50-60% but is a “moving target,” because “as success rates improve for one group of patients, we start taking on higher risk types of patients.”

Most patients receive peripheral blood stem cell (PBSC) transplants, which have surpassed bone marrow “by leaps and bounds,” says Schiller. Among other benefits, PBSC transplants have been associated with somewhat earlier recovery of blood counts, particularly white cells that help fight infection. Yet PBSC transplants also have a higher risk of chronic graft-vs-host disease (GVHD), which is a significant source of morbidity and mortality in bone marrow recipients, because PBSCs contain more mature T lymphocytes than does the marrow, says Sloan-Kettering’s Young. (In GVHD, those T cells attack the host, or transplant recipient, because it recognizes the host cells as “foreign.”)

Alternatively, patients can receive umbilical cord blood transplants, whose T cells are more immunologically “naive.” For that reason, says Young, the technique is more forgiving, and patients can tolerate a greater degree of HLA mismatch than with bone marrow or PBSCs without a concomitant increase in the risk of GVHD. At MSKCC, 18 adult and 7 pediatric allotransplants used cord blood in 2011 (out of 129 and 39 total cases, respectively), says Young.

Yet cord blood also presents problems. For one thing, there are relatively few cells in a cord blood unit, which means adults generally require at least two units for successful engraftment, each of which costs around $30,000, says Zon. Those two “immune systems” then compete with one another until one ultimately wins out, Zon adds, such that it would be better to use a single unit and somehow amplify the cells in it or at least improve their efficiency.

MSKCC takes a different strategy to reduce the likelihood of GVHD. The hospital is one of the few in the US that routinely T-cell depleted transplants, be they from PBSCs or bone marrow. The process involves positive selection of CD34-positive stem cells, which concentrates those cells and removes essentially all T cells at the same time.

“We don’t offer it to everybody,” says Young, “as it is only used for patients who are clearly in solid remission.”

Such patients may have a significant risk of eventual relapse, which is why they undergo allogeneic transplants in the first place, Young explains. Yet any disease recurrence would be sufficiently “indolent” that the CD34+ selected, and hence T cell-depleted allografts would have time to develop new T cells, which can in turn mediate the beneficial graft-vs-leukemia or graft-vs-tumor (GvL/GvT) benefit of an allotransplant. This is also true for natural killer (NK) cells, which are also removed by positive CD34+ stem cell selection, and which develop early after allotransplant and are especially active against myeloid leukemias.

T cells also cause GVHD, Young continues, so patients who can receive CD34+ selected, T cell-depleted allografts have a much lower incidence of both acute and chronic GVHD. When patients with residual or multiply relapsed, higher risk disease undergo allotransplant, the kinetics of their disease recurrence could outpace the reconstitution of T and NK cell immunity providing GvL/GvT, so they must receive unmodified (or T/NK-cell replete) transplants. These patients also receive pharmacologic prophylaxis, which reduces the incidence of acute GVHD by about half and also decreases its overall severity, but usually does not affect the incidence and severity of chronic GVHD.

Thus, there’s a delicate balance when it comes to transplant-associated T-cells, says Young: GvL/GvT and GVHD are distinct but potentially overlapping effects mediated by the allograft, the former being beneficial and the latter associated with morbidity and even mortality in its most severe form.

According to Young, researchers at MSKCC and MD Anderson Cancer Center in Houston have completed a retrospective comparison of T cell-depleted and unmodified allografts, which demonstrates T cell-depleted allografts for acute myeloid leukemia in first remission presented no increased risk of relapse, yet a significantly lower risk of acute and chronic GVHD. Those findings, he says, support a recent report in the Journal of Clinical Oncology by the Bone Marrow Transplant Clinical Trials Network, which found a significantly higher rate of GVHD-free survival at 2 years among patients with AML in first or second remission who received T cell-depleted allografts, compared with those receiving unmodified allografts and standard pharmacologic prophylaxis against GVHD. [2]

David Scadden, Co-chair of the Harvard Stem Cell Institute and Director of the Center for Regenerative Medicine at Massachusetts General Hospital, studies engraftment efficiency in bone marrow transplantation. In 2007 his team showed that an osteoporosis therapeutic called recombinant human parathyroid hormone (marketed by Eli Lilly as Forteo), can improve stem cell mobilization and proliferation in mice. [3]

Around the same time, Zon demonstrated that prostaglandin E2 can also induce proliferation and engraftment of hematopoietic stem cells. According to Zon, PGE2 treatment leads to four-fold better engraftment in mice, likely by two complementary mechanisms: improved stem cell homing to the marrow thanks to increased CXCR4 expression, and increased self-renewal via activation of the Wnt pathway.

In 2007, Zon and Scadden (and others) co-founded Fate Therapeutics to commercialize these findings. The company has tested PGE2-treated cord blood (a formulation called ProHema), in a 21-patient Phase 1b clinical trial. The results suggest faster immune system recovery and more efficient engraftment with ProHema (time to neutrophil recovery was 17.5 days on ProHema, vs 21 days in a “historical control group”), according to a Fate Therapeutics press release.

In his lab, Zon is searching for additional small molecules that can further enhance bone marrow engraftment. His lab has developed a zebrafish assay that mimics cord blood transplantation using two units of blood. The assay uses several zebrafish lines. One produces blood cells that express a green fluorescent protein, and a second produces cells that glow red. Zon’s team isolates hematopoietic stem cells from both lines, treats the green cells with a candidate engraftment enhancer for a few hours, mixes the two cell populations – thereby mimicking the use of two cord blood units -- and then engrafts them in a third zebrafish line, a completely transparent mutant fish named “casper” (as in The Friendly Ghost). After a month, the fish are studied (live) under the microscope to determine which batch of cells successfully engrafted.

“You have green and red stem cells and they start competing,” Zon explains. “We were looking for a chemical that would cause the green cells to behave a little better so your green-to-red ratio increases.”

According to Zon, after testing 550 chemicals – a panel that would have cost millions to test in mice, he adds – his team identified 10 hits, some of which also work in mice, though none has yet been tested in a clinical trial, he says.

Also working on the efficiency of bone marrow transplantation is Indiana’s Broxmeyer. Broxmeyer’s team identified an enzyme, called dipeptidylpeptidase IV (DPP4, also called CD26), which is expressed on the hematopoietic stem cell surface. DPP4, he says, appears to cleave and inactivate a protein “that’s believed to be at least partially responsible for the [stem cell] homing mechanism.”

In 2004, Broxmeyer’s team demonstrated that inhibition of CD26 activity “increase[d] greatly the efficiency of transplantation” in mice. [4] Now he is involved in a pilot trial with a CD26 inhibitor called sitagliptin (Merck’s Januvia) to increase cord blood transplantation efficacy in adults with end-stage leukemia and lymphoma.

“The results are encouraging, but we have not proven that it’s accelerated engraftment,” Broxmeyer says. “But it’s a start.”