We have shown the generation of transgene-free human iPSCs from patients with different lung diseases using a single excisable polycistronic lentiviral Stem Cell Cassette (STEMCCA) encoding the Yamanaka factors (Somers et al., 2010). These iPSC lines were generated from skin fibroblasts, the most common cell type used for reprogramming. Normally, obtaining fibroblasts requires a skin punch biopsy followed by expansion of the cells in culture for a few passages. Importantly, a number of groups have reported the reprogramming of human peripheral blood cells into iPSCs (Loh et al., 2010; Seki et al., 2010; Staerk et al., 2010). In one study, a Tet inducible version of the STEMCCA vector was employed9, which required the blood cells to be simultaneously infected with a constitutively active lentivirus encoding the reverse tetracycline transactivator. In contrast to fibroblasts, peripheral blood cells can be collected via minimally invasive procedures, greatly reducing the discomfort and distress of the patient. A simple and effective protocol for reprogramming blood cells using a constitutive single excisable vector may accelerate the application of iPSC technology by making it accessible to a broader research community. Furthermore, reprogramming of peripheral blood cells allows for the generation of iPSCs from individuals in which skin biopsies should be avoided (i.e., aberrant scarring) or due to pre-existing disease conditions preventing access to punch biopsies.

Here we demonstrate a protocol for the generation of human iPSCs from peripheral blood mononuclear cells (PBMCs) using a single floxedexcisable lentiviral vector constitutively expressing the 4 factors. Freshly collected or thawed PBMCs are expanded for 9 days as described (Chou et al., 2011; van den Akker et al., 2010) in medium containing ascorbic acid, SCF, IGF-1, IL-3 and EPO before being transduced with the STEMCCA lentivirus. Cells are then plated onto MEFs and ESC-like colonies can be visualized two weeks after infection. Finally, selected clones are expanded and tested for the expression of the pluripotency markers SSEA-4, Tra-1-60 and Tra-1-81. This protocol is simple, robust and highly consistent, providing a reliable methodology for the generation of human iPSCs from readily accessible 4 ml of blood.

3.2. Transduction of PBMCs with STEMCCA Lentivirus

3.4. Picking and Expansion of iPSC Clones 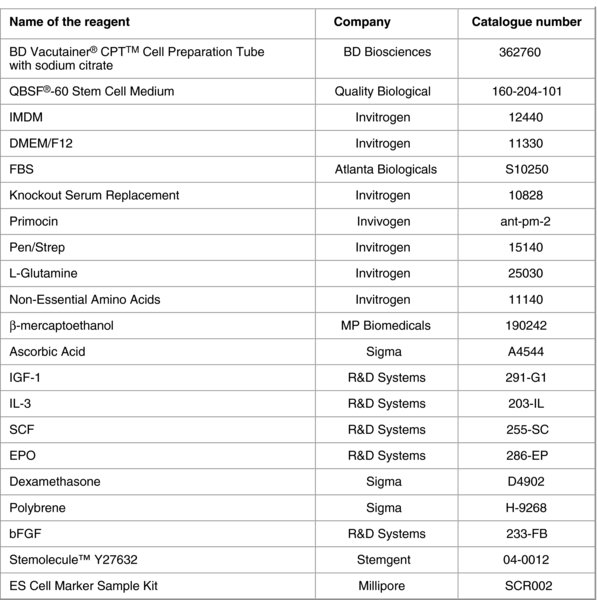 When less than 5×105 cells are transduced, cells may be plated onto one or two wells of a 6-well plate containing MEFs. We have experienced some variability in the time necessary to observe hESC-like colonies, in some cases up to 25 days post-transduction. The use of ROCK inhibitor is critical to enhance the survival and cloning efficiency upon picking of emerging iPSC colonies.

This is an open-access article distributed under the terms of the Creative Commons Attribution License, which permits unrestricted use, distribution, and reproduction in any medium, provided the original work is properly cited.

*To whom correspondence should be addressed. E-mail: gmostosl@bu.edu

This work is licensed under a Creative Commons Attribution 3.0 Unported License.

StemBook Protocols are a collection of protocols collected by a team stem cell core facility heads. The protocols span the range of diverse techniques inherent to the interdisciplinary nature of stem cell research. We welcome your input on these protocols through our discussion forums and comments section. To submit a protocol, please go to the StemJournal website and follow the submission guidelines at: stemjnl.org/protocols.